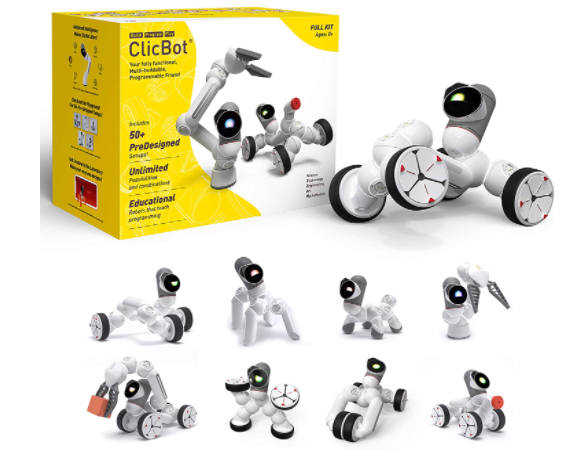 Important : This product will take 15 to 20 Working Days to delivery at your doorstep.

Introduce programming of the robot to kids by presenting them ClicBot Coding Robot Kit. It is a STEM educational toy for young boys who have a great interest in robotics and programming. It is fun to build, program, and play with the little robotic toy. The advanced intelligence technology with non-coding robotics makes the kids explore the world of coding robotics. We bring the imported-quality ClicBot Coding Robot Kit from the Amazon USA and provide it in Pakistan at the best price.

• The ClicBot Robot kit contains 50+ pre-designed setups to set movements of the robot without coding.

• The advanced intelligence technology enables the robot to give 200+ reactions for presenting various personalities.

• The robot can dance, drive, walk, climb, race, and draw with its pre-designed coding.

• You can awake and activate the non-coded robot within just five minutes.

• It is a programmable robot, which enables you to use a drag and drop coding interface on blockly by Google.

• You can program your robot to transform, climb, dodge, and spin through intelligent coding.

• It is a fun educational toy set for kids age eight and above.

Boost your kid’s interest in robotics by presenting this advanced technology block robot toy. Shoppingbag.pk enables you to get the USA imported coding robot kit from the facility of Amazon online shopping in Pakistan. So, order now and get it from the USA in Pakistan.