Cash on Delivery for the orders less than Rs. 6000 within 20 to 25 working days at your door step 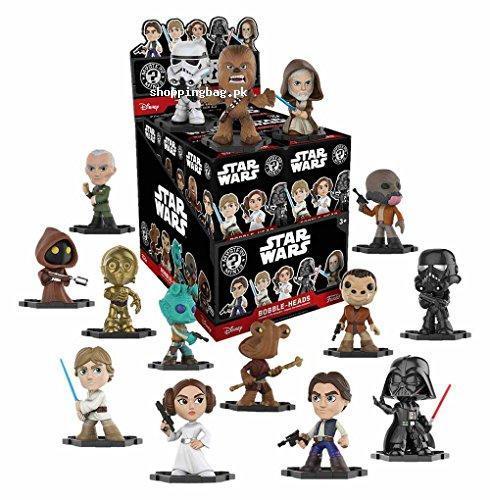 It is the best news for the star wars fans that Funko has released the action figures of star war prominent characters. These action figures come in a mystery mini box of star wars. It is the surprise box in which kid can discover any of the star war hero or villain well articulated figure. It would be fun to collect the forces of Star War from the Funko Mystery Mini Star Wars Action Figure in Pakistan.

·         One blind mystery minis contains only one action figure.

·         The action figures are detailed in articulation and they are posed as per their character in movie.

·         They are made from high quality vinyl material and it has bobble head.

·         There is a black base or disc on which each of the action figures is attached in its intact pose.

Funko Mystery Mini Star Wars Action Figure is recommended for the kids of age above 3 years because it has smaller parts which increase the risk of choking.

·         It helps the kid to develop better social and communication skills when kid pretend-plays with the action figure.

The enormous collection of kids’ toys in Pakistan, at Babytoys.pk, has the premium quality Star war mystery minis available at the reasonable price. Just place your order for toys for kids and get them at your doorstep via the facility of kids’ toys online shopping in Pakistan.

Shoppingbag.pk's Advice
Before to order any product please make sure product technically fulfill your need and contain no illegal ingredients (e.g. wine, alcohol, pig, pork, animal based gelatin etc) or contents. For technical support or manufacturer's warranty of the products found on shoppingbag.pk you can contact directly with the original manufacturer or visit their website. We are just your importer of goods from USA and will not provide any kind of technical support or product warranty or quality check. Photos may be enlarged or enhanced to show detail. Also read product reviews and rating before to buy.